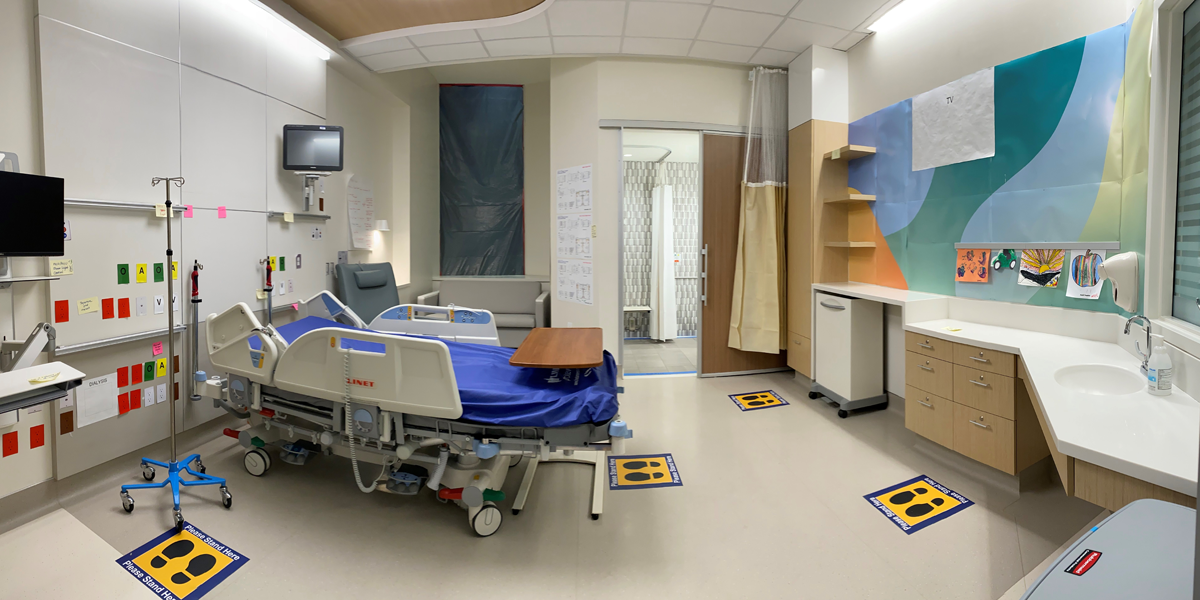 The Value of Full-Scale Mockups

When designing the built environment, architects and designers consider many factors to create a space that is functional, aesthetically pleasing, and meets the goals of the client and users. Some items are easy to quantify and measure, such as square footage, light levels, and egress doors exiting the space, things that are generally covered by building codes. Other design elements are much more subjective but gives the space its character and brings it to life. It impacts how people feel in the space influencing a person’s mood, productivity, and general wellness.

Healthcare design is a project type that highlights these complex design considerations. Marmon Mok has found full-scale mockups to be a powerful tool for our healthcare projects. The mockup exercise helps us validate the functionality of the space, confirm aesthetic design decisions, and achieve both owner and user buy-in during the design process.

The new Women’s and Children’s Hospital at University Hospital, currently under construction in San Antonio, is an excellent example of the full-scale mockup process and the benefits it provides. Working with partnering architectural firm ZGF, and the Construction Manager at Risk team Joeris+JE Dunn, the team prepared, built, and led multiple full-scale mockups for owner and client input of the design.

The Process of Building Full-Scale Mockups

The first phase of the mockup process was conducted out of cardboard in an existing shell space within University Hospital, allowing for ease of access for the clinical teams. Typical repetitive room types were selected to be mocked up, as well as key unique spaces that were deemed essential to patient care. Basic layouts of the rooms were confirmed with input from many clinical user group types including physicians, nurses, surgical technicians, respiratory therapists, physical therapists, Child Life, and support services, any team that would be providing or supporting patient care within the space. The process facilitated much interaction between the departments. The groups discussed placement of equipment and ideal workflows, speaking to their areas of expertise. 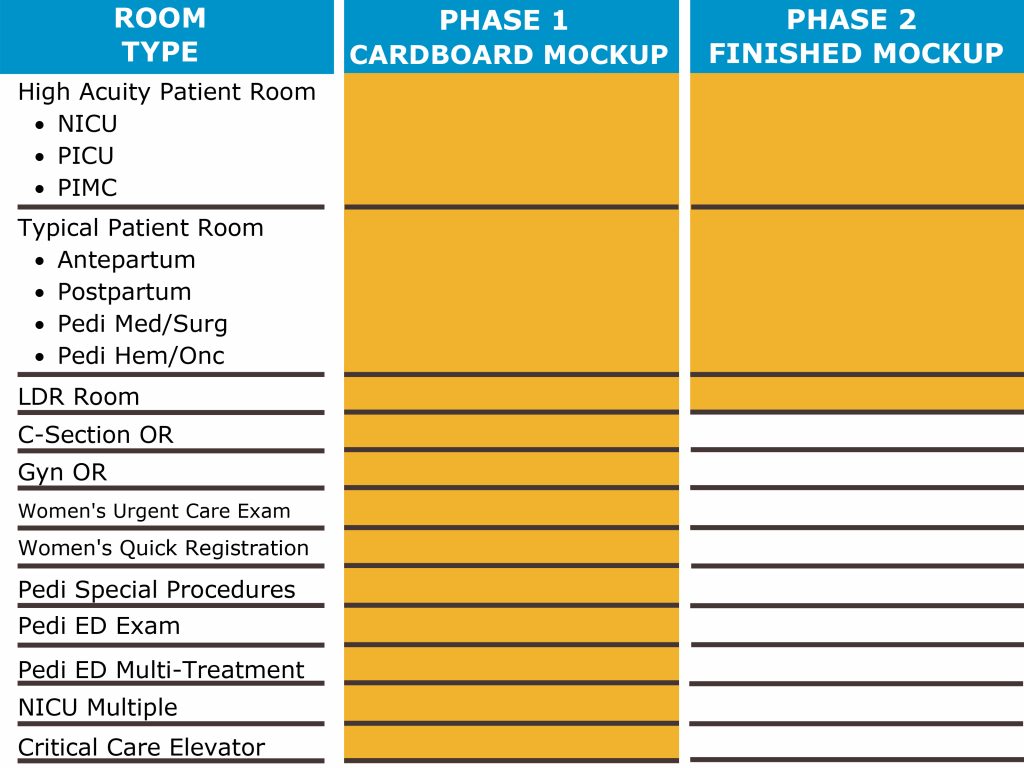 The second phase of the mockup process was focused on patient rooms and labor and delivery rooms, spaces that are repeated throughout the hospital, and places where patients and families will be spending much of their time during their stays. It was critical to the project to get these spaces right. An off-site warehouse was used to construct the mockups, complete with all finishes, working lights, doors, millwork, furniture, and medical equipment. This allowed many things. One was for design validation before the actual building was constructed, giving the design team confidence in their decisions. But more importantly, it provided the clinical user groups and hospital leadership the opportunity to understand the spaces at a level of comprehension that can be difficult to achieve with drawings, renderings, and even 3D virtual reality.

The design team found many things worked as expected in the mockup process, but there were also revisions made to the design directly resulting from comments received. There were many of these revisions, both large and small, but two revisions that directly impact patient care stand out. The first example is the patient bathroom. It was initially assumed that the best path forward was for all the patient bathrooms to meet all ADA clearances and requirements, but this did not prove true during the cardboard mockup.

Nursing and physical therapy teams tested and evaluated the showers in detail, discussing how they would assist their patients while showering. We found that the shower layout that met ADA requirements hindered the care team’s ability to assist their patient. To provide better patient care, the typical patient bathroom design was changed. This important piece of feedback would have been difficult to receive if not for the full-scale mockup. 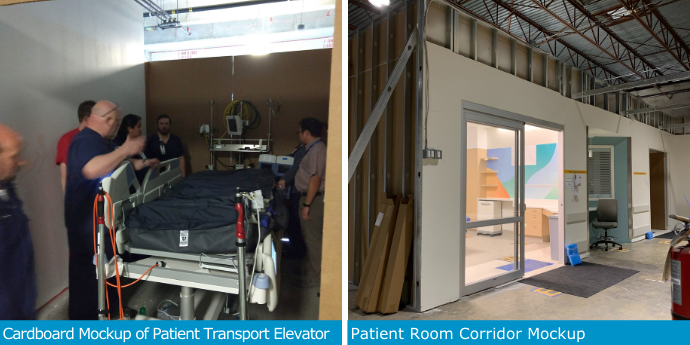 Another important design element that was revised and validated during the design phase was the size of the Critical Care Patient Transport elevator. One of the most delicate and careful of patient transfers occurs when a patient is placed on Extracorporeal Membrane Oxygenation (ECMO). ECMO is an advanced form of life support that allows the patient’s heart and lungs to rest while blood flows through tubing to an artificial lung for oxygenation. This procedure typically occurs in an operating room, and then the patient must be transferred to a patient room. At Women’s and Children’s Hospital, this will require the use of the elevator during transport to the Pediatric Intensive Care Unit. When transporting an ECMO patient, the equipment is brought alongside the patient the entire time and must remain within a certain short distance of the patient due to the tubing length. This can complicate how a patient bed, ECMO equipment, and all the clinical team members present during the transport are loaded into an elevator.

For the Women’s and Children’s Hospital project, full-scale mockups, both cardboard and finished, provided valuable information for all parties involved. It created a venue that facilitated discussion, confirmed or disproved assumptions, and gave the client the ability to see and test the design before construction. The effort spent in creating full-scale mockups for complex projects such as healthcare is far outweighed by the value added in feedback received. It is a powerful tool during the design process that cannot be replicated. 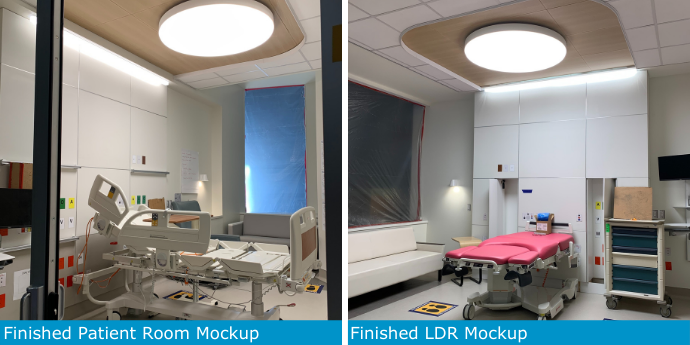